When we launched Learning Disability England we awarded lifetime memberships to 8 self-advocates who had inspired us. We’ve been interviewing them so we can get to know them better! 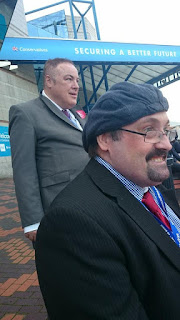 Shaun at Conservative Party Conference in 2014 (with Gary in the background!)

How did you become a self-advocate?

Before I because a self-advocate I was working in another job and my friend told me that there was a job going at CHANGE. Because I live in a KeyRing network I had experience promoting KeyRing to different people. Because I had experience doing that, that helped me to get the job at CHANGE.

If you could change one thing that would make life better for people with learning disabilities, what would it be?

Attitudes. Because some people and the media think people with learning disabilities are lazy or spongers but we’re not. We’re hard-working people and we want the opportunity to have a job like everybody else. And I think people with learning disabilities should maybe go to schools and talk about themselves – we’re just people like everybody else. We’ve got jobs, we’re living on our own, we’re part of the community. We’re human beings just like you – we’re not different.

What needs to happen for people with learning disabilities to have good homes?

What we need is a choice of what home we get. We need to be included in deciding what kind of home we want, where we want to live – because we want to have a choice. If you’ve got different disability needs or need support then you need these things to help you live independently.

If you need support workers you need the opportunity to choose your support worker and they need to listen to you and make sure you’re included in everything.

What does supported living mean to you?

I live in a KeyRing network. I’ve been living with KeyRing for over 15 years. At first I had a lot of support. I used to live in a flat before that – my brother used to live with me but he did everything for me. My brother wasn’t being bad; he just thought I would struggle with things. Moving to KeyRing was a big change. I wasn’t very independent and what changed that was a fantastic support worker who did an action plan for me about things I needed support on. Over time I became more confident in doing them for myself. Then I supported other people to do these things when they moved into KeyRing, like peer support.  And then the people I supported could support me too! It was a win win!

I’m supported on my terms. When I need support I get it and when I don’t I don’t

Why do you think it’s important for people with learning disabilities, families and organisations to work together?

I think it’s very important to include families because I feel sometimes families get left out. Families need to know what’s happening so they can support people. But sometimes they get forgotten.

If you could say one thing to all of our member organisations, what would it be?

Employment and living independently are linked together. Being employed gives you power. And when people are employed and live independently they can inspire other.

What do you think is the biggest challenge for LDE?

What are your hopes for LDE?

My hopes are people with learning disabilities will be able to be more a part of the community, be treated the same, be respected and to get proper paid jobs, not tokenistic jobs.

Another barrier is the media. I hope LDE can show the media that people with learning disabilities are not benefit scroungers. We want people to stop feeling sorry for us.

What’s your advice to other self-advocates who want to speak up?

I’m doing a project at the moment about mentoring. Mentoring is to improve people with learning disabilities’ confidence in speaking up for themselves. People should think about doing mentoring – it will give people like myself a real opportunity to speak up. It builds their confidence, self-belief, gives them a voice and helps them to be a part of the workplace.

Tell us about a time when you’ve spoken up and something has changed.

I was in London earlier this year and I had a meeting with chemists – I did a talk about having a bad experience with chemists. When I went to pick up my medication it was new and I couldn’t read the information. I asked the person at the desk to read the info for me and they said no. they were very rude to me and I had to go and see the nurse.

I talked about at this meeting about making information more accessible for people with learning disabilities and I felt this made a difference. When I use my life experience it breaks down barriers. And then people do take notice.