Here are some thoughts about our meeting on 13th October 2015. We came together with self-advocates, family members and organisations to discuss forming a new learning disability membership organisation.

“This was a new beginning and we achieved quite a bit. The workshops went very well and hopefully we’ll get even more people involved in our new Learning Disability membership organisation. We know things are bad out there so it would be great for all of us to work together rather than separately.” – Gary Bourlet

A big thank you to all our members, colleagues and friends that came along on October 13th to think about what we want to achieve with our new membership organisation. It felt like we took the first small steps to making this happen, but those steps felt strong. The day was fun but also had a seriousness and purposefulness that showed that we all meant business.

The timing could not be better;

The day took place at the same time as the LBinquest was happening and we witnessed an in-depth account of poor service provision and neglect that ultimately led to the death of a young man with learning disabilities;

It took place at the same time a group of parents were meeting the care minister, begging for their young people to be let out of ATUs;

It took place the week after we found out that there are still the same number of people living in ATUs as when the Winterbourne View scandal broke because there are still not enough services to keep people in their communities;

It took place the same week that the Care Quality Commission launched a report that linked poor care services with the government austerity drive;

And it took place the same week that the United Nations launched an investigation into the UK government for breaching the UN Convention on the Rights of Disabled People.

We need to come together now more than ever. Of course there is also much out there to celebrate and things have definitely changed for the better since Valuing People, but we cannot ignore the fact that things are not good in England for people with learning disabilities right now.

Karen Flood and Rob Greig had strong messages; we cannot continue to allow people with learning disabilities and families to be treated badly, we can no longer afford to be complacent and we can’t continue to work in isolation or compete with each other. We have learned from history that things can change when we all pull together.

James, Beth & Jill from Brandon Trust showed us a way we can really listen to people by bringing everyone’s voice together and making big plans from that. We can learn from them and think about how we can do the same with thousands of people.

In the afternoon you took part in workshops which thought about what our vision would be and what we want to achieve as a new membership organisation. Thank you to all the facilitators: Paula Edmonson, Marianne Selby Boothroyd, James Kelley, Beth Richards, Jill Corbyn, Sarah Maguire and May Lee.

Self advocates, families and organisations all had a different take on what they want but also shared many themes. Power was something that came up a lot – everyone wants to make sure that people with learning disabilities and their families has power in this new organisation. All of the groups also talked a lot about bringing people together and the fact that we’re much stronger when we work together.

It was particularly exciting to see, meet and hear self advocates with clear and strong voices, and families with passion (!) and energy. The day brought people and families together along with those organisations that are committed to people with learning disabilities having good lives. Thanks to initial funding and support from members; Advance, Aldingbourne Trust, Avenues Trust, Brandon Trust, Certitude, Choice Support, CMG, Dimensions, Keyring, Macintyre Charity, Paradigm, RLO, United Response, 3Cs along with our partners and friends that have come on board, Inclusion North, NDTi, Foundation for People with Learning Disabilities and BILD.

The last thing we did was ask everyone to sum up how they felt about the day. Here’s what you said: 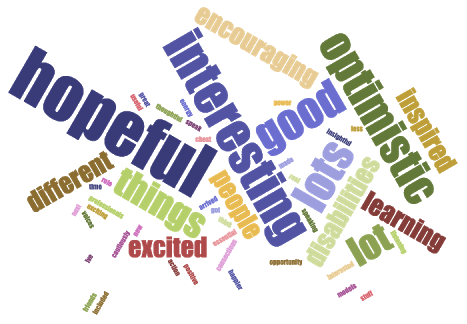 Thank-you all, we look forward to going on this journey with you.