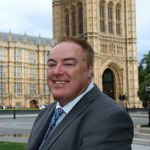 In a week where the Joint Committee on Human Rights has published its report about COVID, Gary Bourlet, Membership and Engagement Lead and self advocate reflects on Human Rights and Brexit.

Listen to the audio version here

As you may know on December 31st, we left the EU. This raised some questions for me about how our human rights will be affected next year.

The Human Rights Act 1998 was passed with cross-party support by parliament; it does not belong to any one particular political party.

Our Human Rights Act takes 16 of the human rights in the European Convention on Human Rights and pulls them down into our law here at home.

Probably due to all the attention that’s been on COVID-19 there has been very little media coverage about what the government is doing around these laws as we leave.

It’s so important that we safeguard our human rights when we leave  the EU.

Lots of people have relied on the European Court of Human Rights to challenge important things and get justice especially when they could not get it in their own country.

It has played such an important part in determining people’s futures.

Before the conversation moves on to changing our human rights laws, people should know what the Human Rights Act is (and is not), understanding how it works not just in the courts but in our everyday lives.

People need to understand that the UK is a member of the Council of Europe. That is where we get our right to take cases to the European Court of Human Rights.

Just because we are leaving the EU does not mean this changes. We are still a member of the Council of Europe. It is a separate thing.

And all the rights in the convention of human rights were brought into our UK law in the Human Rights Act 1998.

But now there has been some thought by the Government to set up a Charter of Rights, but would this go far enough? Would it include the UN Convention of Human Rights which is worldwide? Would we stay a member of the Council of Europe?

If we left the Council of Europe and changed our UK Human Rights law and had something similar just for the UK would it be independent and not controlled by the Government? Would people be protected fully with this new law? Would we have a big say in how it is run? Could we send the Government to court?

These are the questions we need to be asking – there is a risk we won’t know what is or isn’t in place until it’s too late. People need to understand the difference between leaving the EU and belonging to the Council of Europe.

We need to join together and make these issues more of a priority.

I understand that COVID is a very urgent matter, but it is also urgent that we put something in place to protect the rights of so many people.

We need reassurance that there will be something that will allow people to legally challenge things in our post Brexit world.

In the current climate, the government haven’t faced much scrutiny for not raising and being really clear with us about their plans on this important matter.

But we can all play a role in not letting them ignore it any longer!